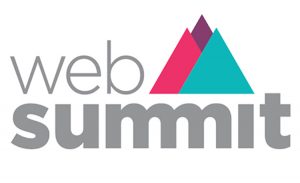 Earlier this year, I decided to visit this conference as I was really interested in it. The size of the event and the fact that so many people from around the world are attending were a reason for me to chose the WebSummit. And after I had got two free tickets after the organizers had reviewed my GitHub account, the way to Lisbon was open for me!

I arrived on Sunday, 4th November at the International Airport in Lisbon. Starting in Frankfurt in the airplane, I met a lot of people who had the same destination as me: the WebSummit conference. As soon as I left the airplane, I recognised that the WebSummit was the dominant topic everywhere. There were taxi like services that picked up WebSummit guests and brought them to the hotels. A bunch of volunteers welcomed the new arrived guests and guided them to the registration booths.

The registration was quite simple and quick. Just scanning my WebSummit mobile apps QR-code made everything ready for the conference. I got a wristband for the next 4 days and a attendee badge. Next to the registration booth, there was another booth for tickets for public transportation. I got a 5 day ticket for all busses and metros for a couple of euros. It was clearly visible that the organisers and the mayority were working together to make this event happen!

The first day’s highlight of the WebSummit was the Opening Night Festival. The doors were opened in time and the entrance was very fast, although so many people were waiting. Many people were allowed to enter the Altice Arena for the opening but much more were watching the event from outside on big screens. I was one of the lucky attendees who got a place in the arena. The atmosphere was quite impressive. A lot of people were waiting with me for the official opening.

I had the chance to talk to a couple of people. I observed that many attendees had an AI-dominated background.

The stage decoration was simple, but very well designed. During the waiting time different songs and videos were played to bridge the time. The light squares in the picture below were water tanks containing different colored lights. During the event, the lights have changed to different colors.

After the opening speach, Tim Berners-Lee entered the stage with standing ovations. The “founder of the world wide web” appealed to the attendees to have a “restart” of the web in order to fight “many problems” – naming “fake news”, “abuse” and “disinformation”.

After Tim Berners, Lisa Jackson, Vice President of Environment, Policy and Social Initiatives at Apple, entered the stage. She talked about Apple’s commitment to the environment and that not only Apple itself, but also their suppliers and some supported companies are running their businsses with renewable energy.

The last talks were from politicians. Antonio Guterres, Secretary General of the UN, talked about technology and how it changes the world, the environment and the society. He stressed that machines are performing more and more tasks that are formally reserved for humans, and are making them increasingly better, such as medical diagnostics and police surveillance. However, he spelled out that “the weaponization of artificial intelligence is a serious danger” cautioning against the impact of technology on warfare, which impressed me. It seemed to me that the threat was also known at UN level.

The Prime Minister of Portugal, Antonio Costa, praised Portugal as a cultural and technological center, connecting Europe to Africa and America (especially in the past). He tried to attract people, especially people with a technical background as well companies and investors, to Portugal.

After the Prime Minister, Lisbon’s Mayor praised also Lisbon as a center of economy and technology. In addition to the Prime Minister, he declared that the WebSummit will take place in Lisbon for the next ten years and the intention to make the city the “capitol of tech and enterpreneurs”.

The second day was marked by a lot of workshops, (startup) exhibiton booths and a lot of networking. In the evening, the Night Summit has taken place close to Cais do Sodré. I started the second day with a workshop at “SaaS Monster”. “SaaS business model and metrics: Understand the key drivers for success” highlighted founding and management of start-ups from the point of view of sales and marketing, which was very interesting. Startups had the chance to introduce their ideas about midday at officially organised pitches.

Big companies like Amazon, Microsoft and Google had huge booths and could not be overlooked. For instance, AWS had multiple places were you could talk to people and join their workshops. I visited “Understanding graph databases” and “Building interactive data driven apps for mobile and web with GraphQL”.

In general, I recognised that “women in tech” has dominated the most speaches and at the booths. Current risks and challenges, such as fake news and manipulation, were addressed by industry leaders such as Mozilla and “The Guardian”. And in the four exhibition halls, the main focus was on: investors and networking.

In the evening there was the Night Summit, where many WebSummit attendees had the opportunity to network. And have a lot of drinks.

Day 3 – much more workshops, networking and a lot of interesting things

Day 3 has started a little bit later as planned. The first workshop was “Graph databases: The best kept secret for effective AI” (do you recognise my interest for graphs and databases?). This was quite interesting as Emil Eifrem, founder of neo4j.com, talked about graph databases demonstrating how journalists processed 2.5TB (nearly 11.5 million emails, documents, bank statements) belonging to “Panama Papers“.

He argued that the “real world” is not organised as row, but as connections. Doing this, it is much more effective to train Machine Learning using those connections.

Afterwards I spent some time at the AWS booth. Talking to the people that host (almost) the half internet, it was quite interesting to get impressed by people who make this happen.

WebSummit was also hosting german companies, such as Siemens, Bosch and Mercedes-Benz and TeamViewer, the company who makes remote access happen. They introduced their new products and the most interesting was “TeamViewer Pilot”, the new platform for Augmented Reality.

The WebSummit and the NightSummit – the party after – had also some funny and fancy sides. Take a look at the following pictures 😃

The third days workshops and talks were minted by open source, IoT by AWS (again) and a lot of networking. It is amazing to see how such an event brings people together.

I had a late start at the last day since due to winds, the security tent has closed. Hence I had to wait about 45 minutes to enter the WebSummit.

The weather is going crazy in #lisbon: the #WebSummit main entrance is closed due to problems with the security checks #WebSummit2018

The first talk was about open source. Igor Perisic, CDO at LinkedIn, talked at “Opening doors through Open Source” about open source, why it is important to contribute and how LinkedIn uses open source to make their services happen.

Igor explained that it is important to contribute, especially if you face a problem where no solutions exists (or no good solution). For instance, contributing to projects at GitHub enables you to collaborate, learn from others and makes you familiar with best practices (for instance, why you should document your code).

In the afternoon, I joined one of the last interesting talks of the last day: “IoT – From cloud to edge and back again” at the AWS booth. This was quite interesting, as the speaker talked about AWS Greengrass – a solution how IoT devices can communicate without being connected to the internet.

The rest of the day as well as the following Night Summit was minted by networking: people from around the world were at the WebSummit. Some of them had fresh ideas and wanted to present them. Others were “just” engineers (as me).

I had four very good and intensive days at WebSummit in Lisbon. I was able to observe that fresh ideas have the potential to turn around the world, even if there are established solutions on the market. I have also seen that the demand to IT is still huge and the potential is big.

Personally, I wanted to see more engineering related booths and topics. There was IntelliJ, Atlassian and AWS that fit this expectation, but in general, the Web Summit was an event that was focused on acquiring customers, talents and expand the network.